Hockey die-hards like the sports’ reputation that the players police themselves. That is, teammates have one another’s backs, and acts of malice against one team will likely result in retribution against the initial aggressor.

Turns out, NHL players may not be the only ones who come to the defense of their own; there’s a decent chance that its referees do, too.

Despite — or perhaps given — his reputation as a high character player and the fact that post-concussive symptoms may have played a role in his mental state, Wideman was given a 20-game suspension, eventually returning to Calgary in March of last season.

But losing Wideman for 20-games wasn’t the only way in which Calgary felt the impact of the Wideman hit. From that game on, the Flames also found themselves in the penalty box significantly more often than beforehand.

Using data from Micah McCurdy (as well as some visual inspiration), I plotted the number of taken and drawn non-matching minor penalties in all Flames games since the start of the 2014-15 season. This includes the Calgary’s 129 regular season games prior to and the 92 games since the Wideman hit. 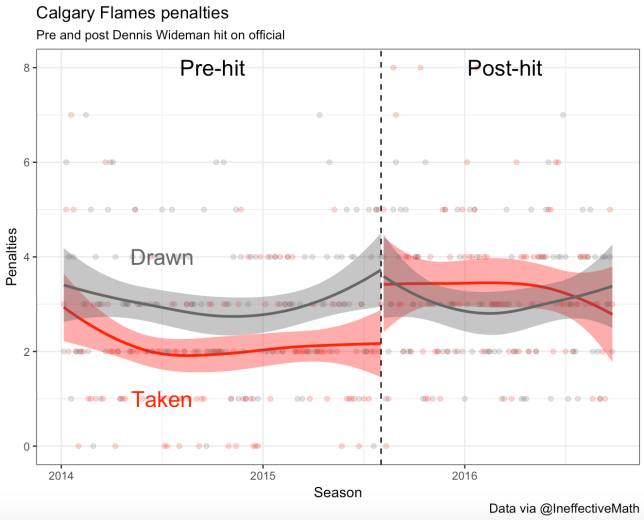 Each game is represented by a point, and the curved lines reflect local polynomial regression curves, shown separately for games before and after the hit (along with errors).

A few things stand out.

Prior to the Wideman hit, Calgary was consistently called for about one fewer penalty per game than opponents. However, while the rate of penalties drawn by Calgary has remained fairly consistent over the last 2+ seasons (shown in grey), after Wideman’s hit, there’s an immediate bump in penalties taken by Calgary (red). Comparing games pre and post-hit, the Flames jumped from 2.1 to 3.3 non-matching minors per-game. That’s … substantial, and a practically significant increase.

As additional evidence, we note that in that prior to the Wideman hit, roughly 1 in 10 Calgary games included no taken penalties. In the 92 games after the Wideman hit, the Flames only had one such game. Moreover, the jump in Calgary’s penalties corresponded with a drop in the league-wide infraction rate.

In addition to the comparison of the curves above, we can assess the significance of the Flames’ increase using the Poisson distribution. Initially linked to hockey more than a decade ago by Alan Ryder, the Poisson distribution is appropriate for penalty outcomes given the fixed amount of time in each game and the discrete counts. Sure enough, the 55% rate increase is statistically significant when comparing mean penalties pre and post-hit, and it is quite unlikely that the difference could be accounted for by chance alone. For those scoring at home, the p-value is less than 0.0001, and the 95% confidence interval for the rate increase goes from 19% to 106%.

Assuming we can rule out luck (or bad-luck) of the draw, what does this suggest?

As one additional sign that (1) is responsible for part of Calgary’s jump in taken penalties, its worth revisiting the chart. If you look at the last month of play, Calgary’s taken penalty average has dipped.

At more than one penalty a game across more than a full season of play, it’s easy, albeit unsafe, to extrapolate and estimate that Calgary’s jump in penalties was worth about 20 goals against. This is an incredible total. Even if only part of Calgary’s increase in penalties was due to a revenge factor, the biggest impact of Wideman’s hit on the Flames wasn’t felt in his suspension, but in the penalty box.

Postscript: A loyal reader asked me to compare the rates of all teams, both pre and post Wideman hit. Here’s that chart, using data from the nhlscrapr package in R.

We can also look at all team-seasons across several years to get a distribution of changes in penalty rates before and after when Wideman’s hit occurred (roughly halfway through the season, on January 27). Here’s a histogram of those differences. No one’s near Calgary in 15-16.