In yesterday’s game against New England, Miami faced a third-and-one from midfield with four minutes to go in the third period.  This was an important play. While the Dolphins trailed 22-7, Miami’s offense in the second half seemed to have awoken, having picked up 111 yards on 10 plays, including a Lamar Miller touchdown run on its first drive after the break. And although the visitors would eventually get blown out, it’s reasonable to argue that at this point, there was still a chance the Dolphins could make it a game.

But without even running the play, Miami did one of my least favorite things a team can do on a third down and short – it lined up in shotgun formation.

With Tannehill five yards behind center, Miller took a handoff and never had a chance, as the Dolphins running back was swallowed by Sealver Siliga and a host of Patriots for a two-yard loss. Miami punted the ball instead of attempting a 4th-and-three, and would go on to lose 36-7.

Of course, my intuition that shotgun can be a bad idea on third and short was more of a guess than anything else. As it turns out, data mostly backs me up.

Using data from Armchair Analysis, I looked at the conversion rates of the 7,094 third or fourth and one plays from 2000 to 2014. League-wide, there’s an absolute improvement of about 4.5% (67.5 success rate versus 63%) comparing plays under center versus from shotgun. The difference is statistically significant (and if you want the p-value, it’s about 2 in 10000).

Of course, offensive-specific data is probably more useful given that certain teams have ended up in short-yardage situations more often than others. When lined up in shotgun, 24 of the league’s 32 teams converted less often than when under center. Here’s a graph, with the red dots showing success rates when lined up in shotgun, and black dots the rates under center. The size of each dot is proportional to the number of plays each team ran, relative to other offensive units in these situations (overall, teams have been under center about 80% of the time). 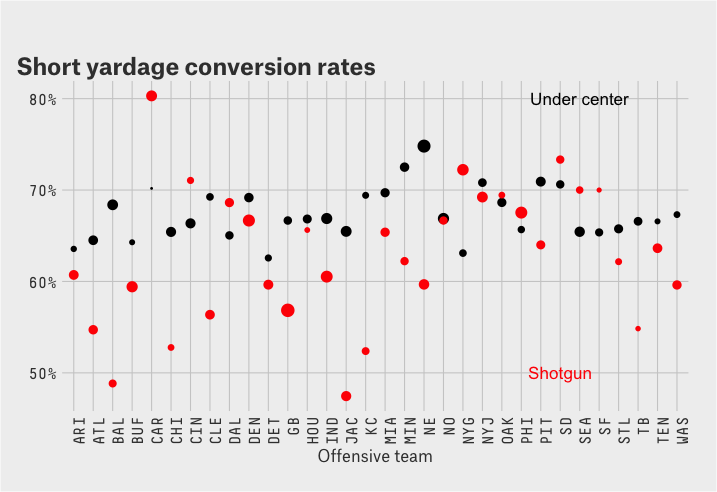 In addition to most of the black dots falling above the red dots, it is interesting to see how different teams use different strategies. Carolina lines up under center less often than any other team in the data on third or fourth and short, and with good reason, as the Panthers conversion rates using the shotgun have been greater than 80%. For a team like Baltimore (49% in shotgun, 68% under center) or Green Bay (57%, 68%), perhaps more plays under center would have been warranted.

These results are more descriptive than anything else, and further work is warranted to account for other factors that may be involved in a team choosing to go shotgun. Notably, the league-wide percentages were pretty similar when I looked only at plays run in the first half. This makes me a bit more confident that the results aren’t skewed by the choices of trailing teams. Additionally, I am defining success rate as simply getting the first down – shotgun plays may be more likely to yield longer plays. A comparison of running versus passing may also be useful.

In any case, the R code is super easy for this; check it out below, although you’ll need Armchair’s data. At under $50, I think its worth it.