The NFL recently updated its extra point rules, moving the yard line for extra points from the 2 to the 15.

In the wake of the the change, one topic of conversation is whether or not the offensive teams will choose to go for two more often. The thought is that if extra points become more difficult, perhaps it is worth the risk of getting two points.

Critical to the conversation is the idea of expected points, which weigh the points and probabilities of conversions against those of extra points.* However, a basic expected points analysis requires, among other assumptions, both that we have reliable data and that all two-point conversions are created equally.

That may not be the case. Here are related reasons that the conversion rate might be higher that its currently being estimated (in most places, around 48%).

Using data from Armchair Analysis (AA), I was accurately able to confirm that teams converted 48% of the two-point conversions since the 2000 season, a number that has been reported in several outlets. But I was also able to obtain that the primary rusher or passer on 40 of these plays did not exist and that a punter/kicker rushed or passed the ball on another 26 plays. Here are some of the players of the players listed with conversion attempts: C Kluwe, B. Moorman, K. Walter, S. Koch, T. Sauerbrun. We can’t expect that crew to be leading conversion attempts on real conversions from the two-yard line in 2015 and beyond

Overall, offensive teams converted just 6% of such attempts into two-points (4 for 26 on plays handled by the kicker or punter, 0 of 40 otherwise). More likely than not, these 66 plays were fumbled snaps, fake extra points by designs, or muffed somethings.

If you remove the unknowns and kickers/punters from AA’s conversion data, things look a bit different, with teams converting at 51% since 2000.

Here’s a chart of the scoring margin at the time in which a team is attempting a conversion (I focused on point differentials between -20 and 20, which ignores a few games on the outside).

Treating all conversions as identical misses the fact that under the previous system, most teams going for it had to do so given the score differential. Moreover, 60% of the teams that went for two were trailing at the time of the attempt. And if those teams were trailing, you could make the argument that they were likely worse than their opponent in terms of overall talent.

Comparing the success rates of these teams yields a small difference: teams leading converted 53% of the time, compared to 49% among trailing teams.

It seems reasonable to think that even the 51% is a slight underestimation of what the success rate of teams would be if there were more evenly distributed attempts by team talent. Further, there’s also somewhat of an association between conversion rates and a teams offensive proficiency: see the next section for a chart.

-There are likely more issues remaining with the data. For example, a botched snap featuring a pass from TE Jay Riemersma shows up in our data (the play is listed here, many thanks to a loyal reader for finding this stuff). But there are also purposeful conversions from non-kickers, including Antwaan Randle El, who had three of them. Further work is needed.

-Teams passed on 71% of their conversion attempts. Strange, given that passing attempts were only 48% successful, compared to 59% of rushes.

Update: A few smart folks pointed out that many of the rushes might be QB scrambles. Here are the success percentages and counts by play type:

-There did not seem to be any differences in conversion rates by weather or surface.

-Here’s a plot of success rate and conversion attempts for each team since 2000. Jets and Cardinals doing their thing. 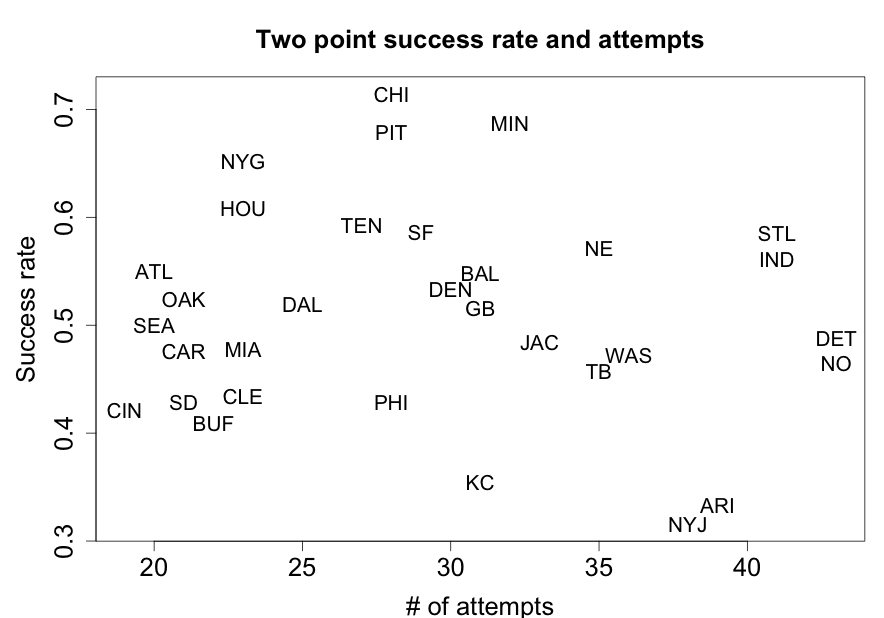 *Here’s a primer on expected points:

Teams have successfully converted 48% of their two-point conversions over the past 15 years – it’s at 49% over the last three years – making the expected number of points on a two-point conversion attempt approximately 0.49 x 2 = 0.98. Alternatively, given that teams make between 90 and 95% of their field goals from near the 32-yard line, and that the extra point remains worth a single point, we can assume that the expected value of a longer extra point is somewhere between 0.90 and 0.95. Game, score, and coaching conditions aside, on average, it is evident that there’s now a slight advantage to going for two.  Benjamin Morris makes the excellent point that we should also expect the number of expected points on XP’s to rise, too, given how awesome kickers have become.