Researchers have long and loudly banged the drum that NFL teams should be more aggressive on fourth downs. Among other sources, see recent work at the 4th down bot and Brian Burke’s primer here, the latter of which links to a handful of excellent academic papers.

However, there’s no evidence that any of this work has made a difference as far as team behavior. For example, in close games (two possessions or less) prior to the fourth quarter, teams went for it 6.4% of the time in 2015, nearly identical to the 6.5% in the year 2000.  In fact, that number was as low as 4.8% in the year 2011.

But perhaps just as many of us analytically inclined fans were ready to give up, there seemed to be a few more aggressive plays in week 1 of the 2016 season, highlighted by Antonio Brown’s fourth-down touchdown grab on Monday night.

League-wide, was this a meaningful uptick in aggressiveness?

For now, the answer is a slightly unsatisfying maybe.

Using Armchair Analysis’ excellent data, I grabbed every fourth down play since the 2000 season. We’re interested in whether or not teams playing close games (two possessions or less) went for it on fourth down, defined as either attempting a rush or a pass. I filtered out fourth quarter plays, as decisions later in the game are too often dictated by game situation.

The following chart shows the weekly 4th down attempt percentage in these situations. I included a separate point for each season to give a sense of the season-to-season and the week-to-week variability. The smooth blue line reflects the trend, and the grey area reflects our uncertainty in the average fourth down attempt rate. 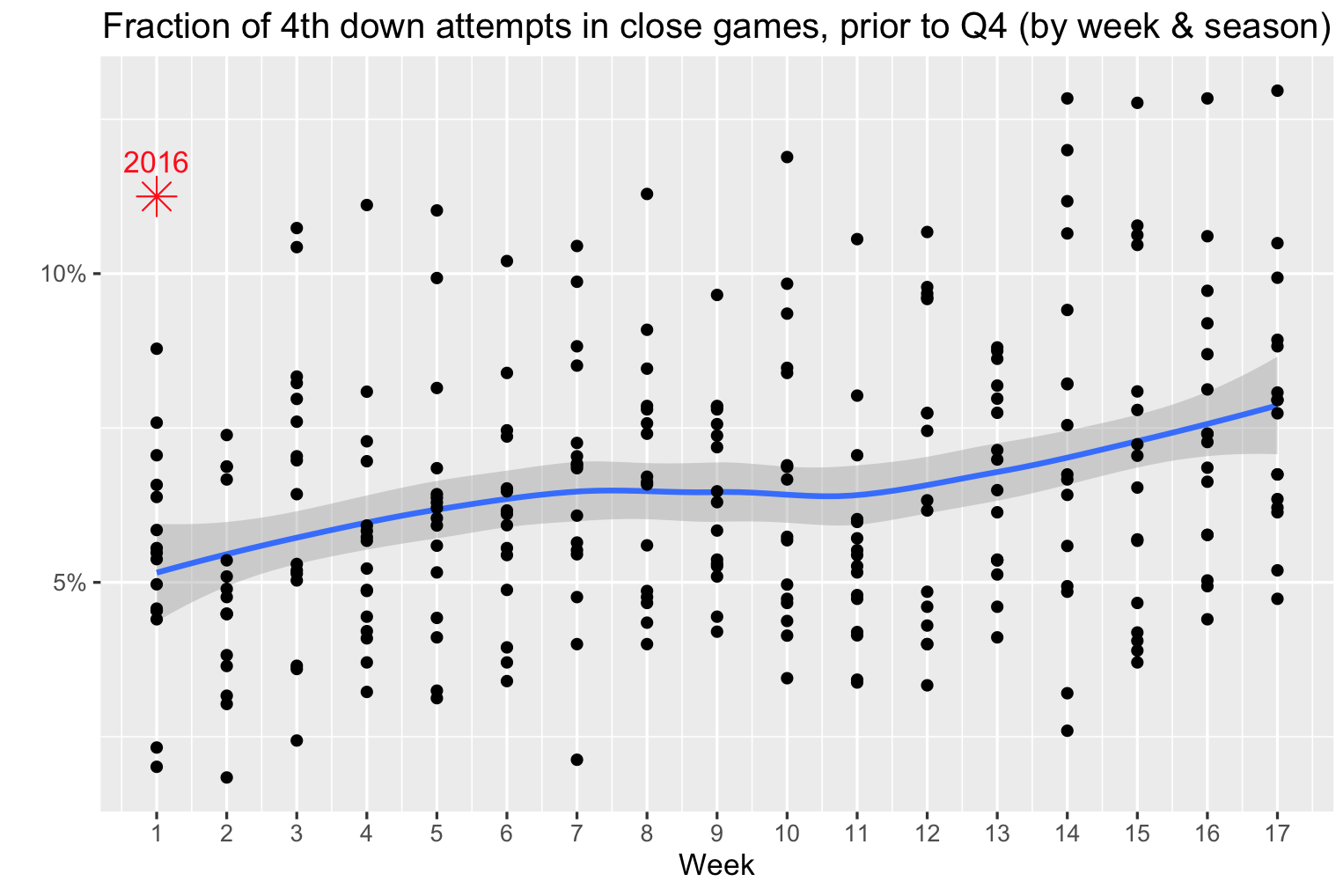 The aggressiveness observed in week 1 of 2016 (the red point in the top left) is only exceeded on a week-level basis by 7 weeks total since 2000. Interestingly, the chart also points to the possibility that coaches are slightly more aggressive later in the year, as shown by the increasing trend by week of the season.

It’s safe to say that, given what is traditionally less-aggressive behavior during the early parts of the season, week 1 of 2016 stands out as unusual. That said, there are several caveats. This analysis doesn’t take into account other factors that undoubtably are linked to fourth-down calls, including field position and opponent characteristics. For example, it’s certainly feasible that there just happened to be more 4th-down attempts in 4th-down friendly spots during week 1.

In any case, it’s certainly worth monitoring as the season progresses.