A few days back, I summarized recent research on the NFL draft.

One interesting anecdote was the reliance of nearly all NFL draft research, both academic and non-academic, on Pro-Football-Reference’s approximate value (abbreviated AV), and it’s player-level career summary (cAV), a metric designed by Doug Drinen and described by Neil Paine in a series of articles here.

So, part of this post is designed to look at AV.

Before I start that, however, here’s a plug for those looking to do work in statistics in sports. We need more and better player-level outcomes in the NFL. Hockey, baseball, and basketball each have a half-dozen metrics which have or are being used and tested in the public sphere. As examples, we know which catchers are good at framing pitches, whether or not hockey teams should dump and chase or carry-in, and, for goodness sake, we have Nylon Calculus dominating the NBA scene on a daily basis. Meanwhile, football is mostly stuck on fourth downs and counting statistics. It will be difficult, but it is time for football fans to step up their games.

What can we learn about Approximate Value?

Why does it matter?

Coming in the future:

How else can we analyze the NFL draft?

Pro-Football-References describes AV as “putting a single numerical value on any player’s season, at any position, from any year.”

Points are awarded to offense’s on the basis of team points per drive, relative to the league average. These points are then divided up among member’s of each offensive unit. A similar strategy is also used for defensive players based on points against. In addition, bonus points are given for being named an All-Pro, and points are also awarded for making the Pro Bowl at certain positions. Career AV numbers are weighted by season-level ones to account for varying numbers of seasons played. A more complete description is found here.

In understanding AV, it is useful to start by looking at the distributions by position among players drafted before 2010. Here’s a plot of career AV (cAV), split by era. I left out players drafted after 2010 as they have not had much of a chance to accumulate a representable career number. 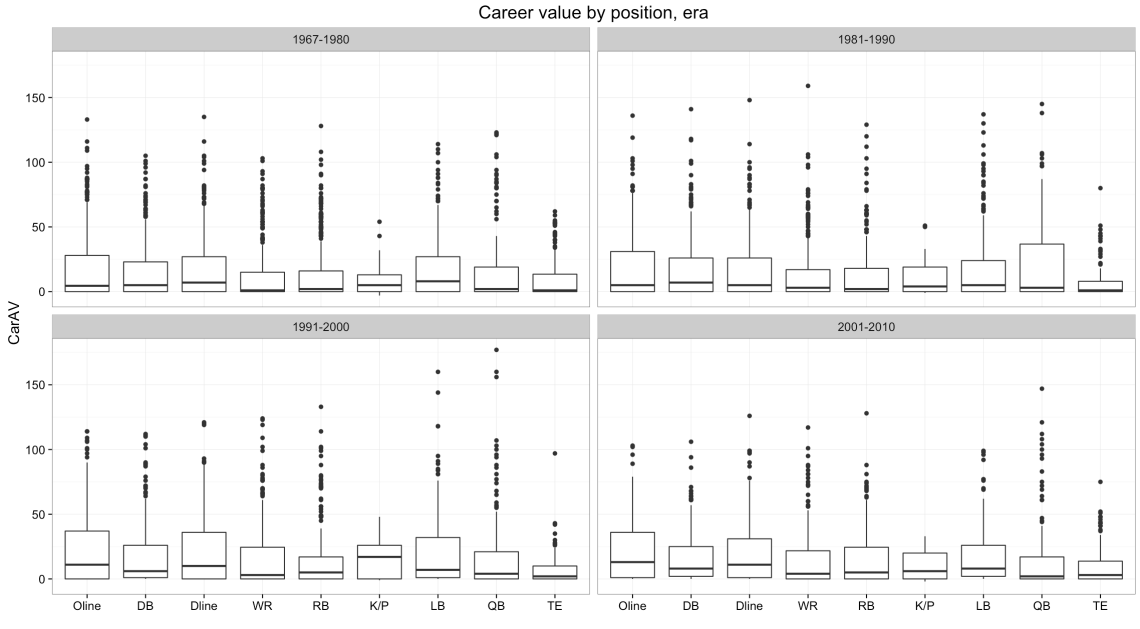 A few things stand out.

-The distribution of cAV by position appears consistent between eras.  That is, the shapes of each boxplot are the roughly same within each position, moving from era to era. This seems interesting, and arguably debatable, given changes to the game since 1967.

-At all positions, more than 50% of players accumulate a cAV of less than 10 (recall: Tim Tebow’s was 12). This makes sense, given the number of players drafted that barely play a game. The right skew at each position also seems reasonable.

-Tight ends appear to be the lowest-valued position, with offensive linemen and linebackers the highest, as judged by median career AV and density in the right tails.

-Relative to what I perceive of the last several years of the NFL, as well as what teams are paying top players, there seems to be a bit of disconnect. For example, quarterbacks have long been paid substantially more than players at other positions, implying that the best ones are worth more to their teams than the best players at other positions. Other than a few quarterbacks drafted in the 1990’s, this doesn’t show up in cAV.

Let’s start by fitting cAV to draft position across all seasons and positions. Each point below is a player, and the blue curve is a non-parametric smoother, which accounts for the likely non-linear association between draft position and performance. If this curve looks familiar, it looks like the one used in several of the draft-trade charts in circulation.

One question that I am really curious about is whether or not teams have gotten better at drafting since the late 1960’s.  An obvious thing to do would be to fit an identical curve to the one shown above across different eras. If curves in recent years are higher and/or steeper, it would suggest that teams in today’s NFL are better at identifying talent and are drafting those players earlier.

Unfortunately, there’s a problem with that strategy. Turns out, cAV has grown over time. Here’s the average player cAV among the draft’s first 260 picks (this is the number of picks in the last few years. The trend is identical when using different cutoffs). The grey area accounts for our uncertainty in the trend curve.

The average cAV of players drafted in 2006 is about 3-4 units higher when compared to players drafted four decades ago. It’s a significant increase as well as a practical one. All together, on a yearly basis, about 1000 more units of cAV are being handed out now than in the early stages of the league. [Edits: This matches conclusions found by Danny at Football Outsiders. Sean proposes that expansion is responsible for part of this increase, given that AV is tied to playing time.]

Looking into the formula for AV, it is unclear what is causing these increases. One possibility is that more players have been drafted in recent years in the positions that AV values more than others. Another possibility, albeit a stretch, would blame recent increases in the number of Pro Bowl players, as AV rewards this.

Why does this matter?

Well, as far as looking at draft success over time, increases in cAV are vital to identify. Without adjusting for when a player was drafted, standard analyses could confuse improved league-wide drafting ability with what appears to be era-specific changes in our outcome measure.

To sum, we know that drafting players in any sport is hard given the extrapolation required to project the performance of young athletes several years down the line. In addition, analyzing the NFL draft is made even more difficult given that what is currently a poor set of outcome measures.

Much of today’s draft research uses cAV, a promising metric which is attractive in that it’s a single number accounting for many team and individual level performance metrics. However, we showed above a few potential weaknesses in cAV, at least with respect for its use in looking at the NFL draft. Overall:

-Valuations are increasing in time.

Under these constraints, one reasonable recommendation for using cAV is to make it year and position specific. In future work, I’ll propose one way of doing this.