The competitiveness of Thursday Night NFL football (TNF) contests has been discussed practically everywhere this past week. The Bleacher Report, Pro Football Talk, and the USA Today, for example, all got in on the action, deriding the NFL for the number of blowouts in its Thursday contests.

Over on Forbes, Jim Pagels offers an interesting and more quantitative take, showing that, on the whole, Thursday night outcomes are not much different from the average outcomes from weekend contests. Pagels provides this table:

These results mirror the work of Grantland columnist Bill Barnwell, whose research found no evidence that TNF games were any sloppier than the rest of the league’s games, as judged by, among other metrics, the number of turnovers and dropped passes.

One aspect missing from much of the discourse on TNF contests is whether or not those games were supposed to be close to begin with. This is important because the NFL, and its television networks, get to pick who plays on Thursday night!

Fortunately, there is an easy way to judge the “closeness” that we expect in an NFL game- using the game’s point spread! Using Sunshine’s data system (with a major h/t to the “weekdays” function in R), here’s the average absolute spread for each NFL game, by year and weekday, since 1978.

From the plot above, it’s fairly clear that the average point spread of TNF contests (in black) is not much different than that of other NFL games (in red or grey). If anything, over the past few years, TNF contests have had larger absolute point spreads than games played on weekends (the data goes through 2013).

Here’s a similar plot; this one shows the RMSE by year and game day, for all NFL games since 1978. 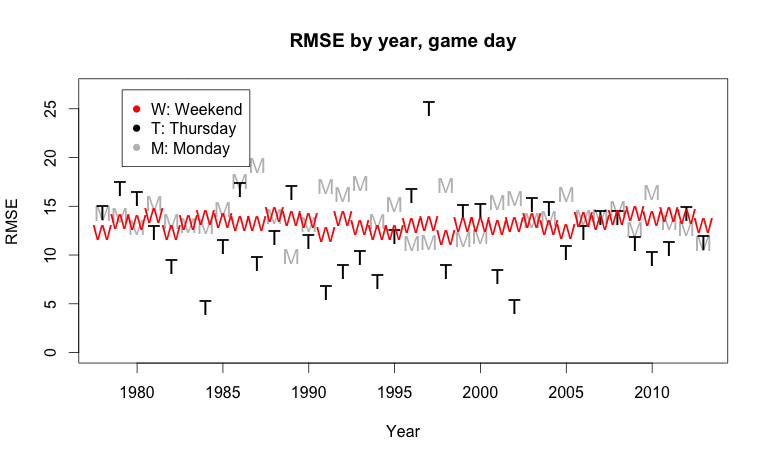 On the whole, the variability across the point spread does not appear to vary by the day of the week in which the game was played. If anything, Thursday night contests have actually been closer than the point spread anticipated over the last decade or so (2014, of course, aside). Also, it’s interesting how consistent the RMSE for all NFL games has been over time.

Overall, given these results, we can be more confident that the results of Pagels, Barnwell, and many others are not due to the fact that TNF contests were supposed to be closer, perhaps making it more reasonable to assume that the blowouts over the past few weeks are not accounted for by the day the game is played on, and instead simply due to chance.