As in 2013, I had a great experience at the 2014 Joint Statistical Meetings (JSM), held August 3-7 in Boston.  I made it to about 20 sessions, and while that sounds like plenty, it still means I missed about 640 other ones!

Here are some of my take home points from the last few days – I’ll post on the sports analytics panels I attended some time next week.

1. The teaching of statistics is changing, and changing rapidly.

Among the most popular sessions that I attended were a pair (one, two) sponsored by the Section in Statistics Education. While these talks really interesting, I was more amazed at how many statistics teachers appeared willing to enter unfamiliar territory by shunning the curriculum’s that they’ve taught for the past several decades. For example, I heard several comments like these ones, from what appeared to be current statistics faculty members.

“I think I’m finally going to have to learn R”

“My students will love a course in data science. I just hope I can learn it myself?”

“It doesn’t really make sense to use that book anymore”

Along similar lines, the amount of attendees that were rapidly taking notes at each of these talks was astounding. I say this with my own admission – I took my own notes on twitter!

This enthusiasm to improve the teaching of statistics is great, and it’s sorely needed. I was lucky – when I decided that I wanted to be a statistics professor, I had no choice but to learn R to do my research. Others weren’t so lucky, and now they have to relearn computing on their own time. I’m glad this is happening, I hope the transformation continues.

These discussions reminded me of a few lines from George Cobb, professor emeritus at Mt. Holyoke College, who was a likely a few years ahead of his colleagues back in 2007, when he advocated for teaching statistics using randomization methods and a sound base in computing.

For two thousand years, as far back as Archimedes, and continuing until just a few decades ago, the mathematical sciences have had but two strategies for implementing solutions to applied problems: brute force and analytical circumventions……before computers, there was no alternative. Now, there is no excuse.

2. A Thursday morning session is like losing the lottery.

I was really looking forward to Thursday morning’s panel on Big Data innovations: Sherri Rose and Corwin Zigler of Harvard are both young stars in causal inference, which is my research area, and Etsy’s Hillary Parker and Facebook’s Sean Taylor are two statisticians who have helped expand the popularity of data science. Given the popularity of Big Data talks earlier in the week, I expected a big crowd. Here’s the observed, Thursday morning crowd: 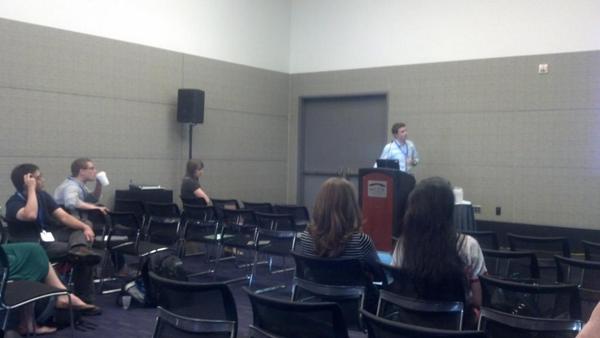 While we’ll never for sure – the fundamental problem of causal inference is that we only got to observe the attendance for this talk at this one session, and not at any other times – but I suspect that if this same talk were to have been held Monday afternoon, the room would have been filled.

3. There were some really, really good talks

This year, I went outside the box and attended some talks on applications of statistics in areas that I hadn’t heard of before, and found them to be both informative and invigorating. Lots of fun statistics memes and visualizations, for example. And the coolest part is that several speakers posted their talks online.

Here are a few people that posted really interesting slides – please email me if you have others.

Mine Cetinkaya-Rundel on Data Fest (here)

The biggest talk at JSM is reserved for Monday afternoon’s presidential invited lecture. Last year, for example, Nate Silver gave his 11 principles for statistics during this time to a huge crowd in Montreal.

The 2014 speaker for this session was Stephen Sigler, whose talk was titled the “7 pillars of statistical wisdom.” It’s embarrassing to say this, but I actually left early. Why? There was no room. The ballroom for Sigler’s talk only fit about 2/3rds of the audience that was interested, and with no auxiliary room to watch the talk, several people were either turned away at the door or left early due to the crowded ballroom.

As a statistician, it was disappointing to see the attendance prediction estimate be so far off!

If you want to hear more about Sigler’s pillars, see Rick’s summary here.

Credit to these four acts for clever lyrics and great performances.

Glad there was a four-way tie for the top prize, as they each earned it.

In any case, thanks for reading, and I look forward to Seattle in 2015 and beyond (see the schedule below).