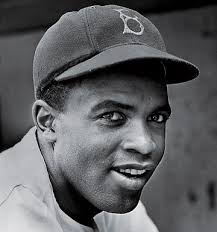 Last night I watched “42”, the Jackie Robinson movie, for the first time. While I liked the flick, it comes as no surprise that halfway through I was on Robinson’s page on baseball reference to get more stats about the exact type of player Robinson was. I was impressed, and here are a few of my major takeaways.

(1a) The movie clearly focuses on how opposing pitchers aimed to hit and brush back Robinson. This appears to be roughly accurate. In each of his first three seasons, Robinson finished second in all of baseball in terms of being hit by a pitch (HBP).

(1b) Robinson was hit by 72 pitches over his 10 year career. Clearly, though, times have changed. While Robinson was hit by more pitches than his peers, those numbers wouldn’t stand up to today’s totals. In more than 100 fewer games, for example, the Phillies’ Chase Utley has already been hit by 154 pitches.

(1c) For those keeping track at home, current Red Sox outfielder Jonny Gomes has also been hit by 72 pitches in his career, which ties him and Robinson for 204th on the all time list.

(2a) The racism Robinson faced appears to have manifested itself in surprising ways. I took a look at where Robinson should have finished each year in National League MVP voting ( as judged by baseball-references’ “Wins Above Replacement”), and where he actually finished.

I used the prime of Robinson’s career as a second baseman (1948-1953), which are essentially the years in which he received MVP votes, and made the scatter plot below.

(2b) In other words, in five of the six years, Robinson finished worse than expected given his WAR, and in that sixth year, he finished where he should’ve (first, 1949).

(2c) The year 1950 seems particularly egregious, as Robinson posted the league’s second best WAR (7.47) but finished fifteenth in the MVP voting. That year, the Dodgers finished second in the National League, with Robinson leading Brooklyn in both WAR, batting average, and OPS+. Remarkably, three teammates finished in front of Robinson, as did Philadelphia’s Granny Hamner, who finished with the 32nd best WAR in the National League. Hamner, like Robinson, also played second base, and in 1950, he finished with worse statistics than Robinson in nearly every category baseball-reference has (other than RBI, in which Hamner had 82, Robinson had 81). Smells fishy.

(2d) How unlikely was it for someone to finish with such a high WAR but so low in the MVP voting? In more than 80 years of National League MVP voting, only three times has a position played finished with a Top 2 WAR but ended up at 15th in the MVP voting or below. Specifically, Andre Dawson (2nd best WAR, finished 21st) in 1982 and Mel Ott (2nd best WAR, finished 20th) in 1935 had MVP voting finishes much worse than expected (Dawson’s, though isn’t totally unreasonable, as his team finished with the third-to-worst record in the league that season).

(2e) You might be curious whether or not Brooklyn’s finish as a team could explain these results. For example, if his team struggled, that could explain the lack of support for Robinson. However, in each of these six seasons, Brooklyn finished with a winning percentage of at least 0.545, and in three of the seasons depicted, the Dodgers won the NL pennant.

(2f) This smells like a great future project: determining what goes into MVP voting. Outcome would be either total votes or MVP finish, and control variables would be player statistics, team statistics, and, perhaps, something for player race. How, though, would you model MVP votes and/or MVP rank?

(3) One nemesis of Robinson was St. Louis’ Enos Slaughter, who famously spiked Robinson during his rookie season. I wonder if it made Robinson smile to know that in winning the MVP in 1949, he denied Sloughter of arguably his best change at the award. A future Hall of Famer, Sloughter finished third in 1949, and for his career, he never got to claim the top prize.

(4a) Random notes: in is first baseball game at UCLA, Robinson went 4-4 and stole home.

(4b) Robinson struggled in his only baseball season at UCLA, hitting 0.097

(4c) I wish youtube were around 80 years ago. This was the best I could get from a search of “Jackie Robinson football.”